After Easy and Magic Comes Perfect

Watch out. Perfect confuses performance with results. It ignores the role of forces outside of your control, including randomness and luck. Perfect doesn’t allow for human fallibility. 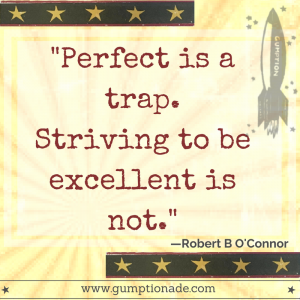 Perfect is a trap. Striving to be excellent is not. Excellence is from process and growth, not outcomes and opinions of others. To be a perfect dieter requires a perfect diet and a perfect you. Not gonna happen.

But dieting can make you better than you were. You can learn about yourself by paying attention to the process. You can become a better person, and a better dieter. A little closer to perfect.

Perhaps the self-improvement program you select will give you the tools you need to become better. Don’t let that confuse you. The spade does not plant the garden. It is not the program that is changing you; you are changing you.

Mr. Magic can be most dangerous to your New Year’s Resolutions when he is pseudo-rational. When he serves up new age versions of the traditional life-as- journey metaphor: You are the CEO of your life; life is a work of art; life is like managing an investment portfolio. It’s not.

Heroic feats of productivity are part of Mr. Magic’s spoonbending. Not a moment will be lost. The apps, the hacks, the trading software, the notebooks, the juiced-up calendars and to-do lists online and off are indispensable implements for the superhuman parsing of every minute of every day. 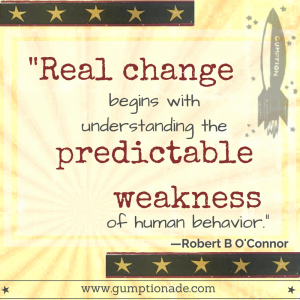 This is another version of Mr. Magic’s mind power spoonbending. Somehow you will find limitless knowledge, time, and energy for self-discipline and industriousness.

Now the products offered by Mr. Magic or the other spoonbender Ms. Easy are not useless. But like a bar of soap that does get you clean but costs $972, they are overpriced and oversold.

Real change begins with understanding the predictable weakness of human logic, and searching for the reasons why you can’t or won’t do better. That takes more than soap. 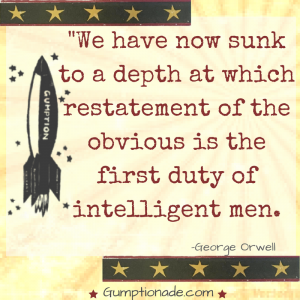 A magician named Uri Geller received widespread media attention in the United States in the 1970s. He claimed to be able to bend metal spoons using paranormal mind power.

Geller appeared on many U.S. and European television programs to demonstrate. Critics showed that he used simple tricks. This did not stop Geller from making a living from the illusion that spoons can be bent with mind power. 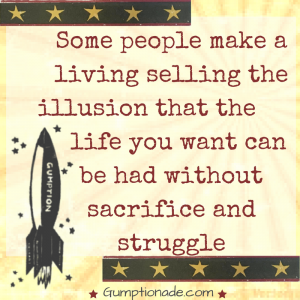 Some people make a living selling the illusion that the life you want can be had without sacrifice and struggle. That’s magical thinking. Over one hundred million people in the United States go on a diet in any given year. Dieting is a growth business, despite and because of the fact that the customers fail to get the results they want.

There is copious spoonbending centered on the illusion of painless, convenient change: Eat what you want and still lose weight! Spoons are not bent by magic. Losing weight is neither convenient nor painless. Even people who succeed tend to add the lost weight back in a year or two.

Every January many of us become powerfully infatuated with the idea of a new and improved version of ourselves: fit; organized; rich; and—above all—thin.

Infatuation knows nothing of common sense. We don’t foresee, let alone prepare for, what Carl Jung called “the laborious adaptations and manifold disappointments” that accompany any sort of significant personal progress.

The problem is not that this soap won’t get us clean; the problem is that the sellers claim it will keep us clean forever. And they want $972 per bar.

What we spend is not surprising. America is a rich and optimistic nation. Most of us hope to be better than we are now.

What is surprising is how poorly most of these products perform. Their goal is to overcome your resistance to buying, not your bad habit.

Spoonbenders encourage passive consumption over creative suffering. They are false guides. They direct you away from where you need to go.

How will you combat the spoonbenders? Gumptionade – The Booster for Your Self Improvement Plan will show you how.

“Do not block the way of inquiry.”
– Charles Sanders Peirce

“Feynman is becoming a real pain,” said Chairman William Rogers at one point. Of course he was. Feynman was curious. Feynman was a scientist. He wanted facts.

The Rogers commission conducted many hours of hearings and received many written reports. Two facts available to members—and to NASA before the disaster—were:

Feynman was curious: Had a connection between these two facts caused the disaster? A piece of O-ring was passed around during expert testimony. Feynman cooled the sample in his glass of ice water and pinched it. It failed to spring back into shape. The commission saw that very cold O rings lost flexibility. Inflexible O-rings could cause a fuel tank to leak.

Feynman went on to uncover the fact that NASA misunderstood commonly accepted measures of risk, understating the chance of a shuttle disaster “to the point of fantasy.”

Nobel laureate Richard Feynman was smarter than the other members of the Rogers commission. He was also more curious. He had more common sense. He had gumption.

Curiosity helps you bypass obstacles to clear thinking, including incentives to ignore unpleasant facts. NASA’s obstacle that cold afternoon was “Go Fever,” the top-down bias of a group toward consensus and forward movement without effective consideration of risk.
…………………………………….

Here on Earth, money is the primary cause of bias. If you find yourself unsure about where someone is coming from, be curious and follow the money.

Let us say you are sixty years old and have significant left knee pain while walking. The orthopedic surgeon says you need a knee replacement ($40,000). The chiropractor recommends manipulation (full course, $1,700).

Why would they each have a different opinion about what is best for you? Follow the money.

Your family doctor recommends you take aspirin (ten cents per day) and lose weight (free). This option will not make her any money. This is the best thing to try first.

How will you follow your path to inquiry? Gumptionade – The Booster for Your Self Improvement Plan will show you how. 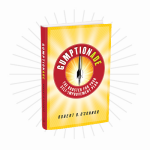 Chapter 6: Know What Courage is For (PDF)
Order your copy of Gumptionade today. Buy on Amazon