Genius Is Not Gumption

By Robert B O'ConnorOctober 7, 2017Blog
No Comments

– The Earl of Lytton

Genius is an endowment. A few people are born with it. Some fraction of those people find themselves in a family or field where their genius is recognizable and applicable.

The rest of us can be inspired by the likes of Shakespeare, Ben Franklin, Mozart, Einstein, Martin Luther King, Michael Jordan, Mother Teresa, Paul McCartney, Oprah Winfrey, and others. We may learn something from observing aspects of their behavior, but we ought not to compare ourselves to them.

Their colossal accomplishments are due to a unique combination of inherited genes, phenomenal luck and superhuman appetite for hard work. This is amazing, but it is not gumption.

Mark Twain tells us to forget the idea that “Ben Franklin acquired his great genius by working for nothing, studying by moonlight, and getting up in the night instead of waiting ’til morning…these execrable eccentricities of instinct and conduct are only the evidences of genius, not the creators of it.”

Genius, by the way, is usually not transferable outside its field: 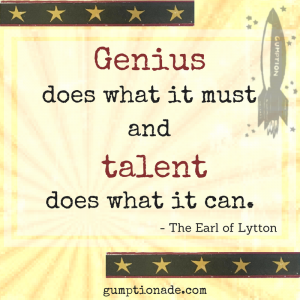 He had a poor batting average and low on-base percentage in his one season. He returned to basketball and won three more NBA championships.

• Linus Pauling won the 1954 Nobel Prize in Chemistry. He won the Nobel Peace Prize in 1962. In the 1970’s he advocated loudly for vitamin C as a cure for colds, flu, and even cancer. He wrote a bestselling book on the subject. In the words of physician Paul Offit, Linus Pauling was “a man who was so spectacularly right that he won two Nobel Prizes and so spectacularly wrong that he was arguably the world’s greatest quack.” But still a genius.

Genius is not gumption.

How will you make the most of your talents? Gumptionade – The Booster for Your Self Improvement Plan will show you how.