Necessity Is Not Gumption

By Robert B O'ConnorSeptember 29, 2017October 4th, 2017Blog, Uncategorized
No Comments

Gumption is courage, resourcefulness and common sense in harness together. Despite what people tell you – usually while they try to sell you – becoming better than you are now is not easy or convenient. It takes courage and time to change ingrained habits.

It is said that Caesar burned his boats on the beaches of Kent during the invasion of Britain. He was creating a necessity on order to call forth courage. Caesar’s legions did indeed conquer 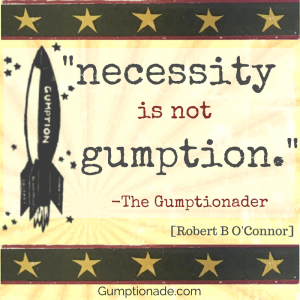 Britain, at least enough of it to build new boats. People with common sense don’t burn their boats. They realize they may have landed in the wrong place, that getting killed by the Britons for lack of Plan B won’t help the empire.

There is another problem with relying on necessity to produce courage: the danger is often not as vivid as burning boats. Sometimes the smoke and the fire—the ill- health, divorce, bankruptcy, driving bans, and other disasters—are so far down the road that we are fooled by the illusion that there will always be time to avoid them.

Your obese friend knows she must lose weight. Chronic procrastinators know they sabotage themselves. Smokers know they must put down their cigarettes. But the disasters they face are in the future.

These people do set off on the march to safety, perhaps around New Year’s Day, but necessity generates insufficient force to keep them moving forward. They experience Day Four. They retreat. Necessity is not gumption.

How will you conquer your challenges? Gumptionade – The Booster for Your Self Improvement Plan will help you find your way.