“I had an interview with the Board of Guardians of St James’s parish, on the
evening of September 7. In consequence of what I said, the handle of the Broad
Street water pump was removed on the following day.”

Physician John Snow invented epidemiology during the terrifying London cholera outbreak of 1854. He went door to door in Soho, the most affected area, counting the number of people in each house who had been sickened. He then drew a map of the neighborhood, showing the number and location of confirmed cholera cases. 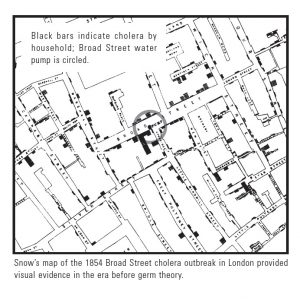 There were no public water lines. Households obtained their drinking water from pumps scattered around the city. Water from Soho’s Broad Street pump was considered superior.

This was before germ theory, but not before germs. Snow’s map gave him vision. He saw the correlation between cholera cases and households using the Broad Street pump. He saw microbes without the benefit of a microscope. He saw cholera moving invisibly through water.

This contradicted leading scientists, who believed that cholera and other urban epidemics were caused by “miasmas,” bad air found in densely populated areas. After Snow convinced the parish Board of Guardians to remove the handle on the Broad Street pump, he discovered that its water had been poisoned by sewage from a nearby household cesspit. 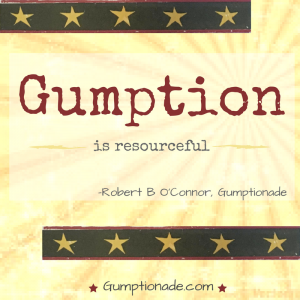 John Snow saw the footprint of cholera and translated it into statistical fact, the means at hand to end the outbreak. Vision. Resourcefulness. Gumption.

Public health medicine in London in the 1850s was practiced under conditions of uncertainty and unpredictability—in what is now called a low-validity environment. An example in our own time is online dating.

It’s wise to develop simple formulas for decision making in low-validity environments. In London’s cholera epidemic, it was the households’ source of drinking water and cases of cholera. In online dating, it’s age, education, and income. It’s resourceful to draw a map.

Dr. Snow drew a paper map of cholera’s footprint. Steve Jobs carried a map in his head of a mass consumer market that did not yet exist. Billy Beane of the Oakland A’s took sabermetrics and mapped undervalued baseball players.

All three used the means at hand to see what others could not. The baseball establishment, Xerox, and the leading scientists of Victorian England had narrower vision. They did not recognize the new facts. They were not resourceful. They lacked gumption.

You operate in a low validity environment much of the time. Improve your own vision. Look for facts about yourself. Map the things that you do.

What big opportunity is right in front of your eyes? Gumptionade – The Booster for Your Self Improvement Plan can help you see it.