Gumption is Resourceful – Part I

“We don’t need more strength or more ability or greater opportunity. What
we need is to use what we have.” —Basil Walsh (p.23)

Steve Jobs got a tour of Xerox’s Palo Alto Research Center (PARC) in late 1979. Part of the tour was a demonstration of the Alto, a prototype personal computer running point-and- click software, using a device called a mouse.

“It was like a veil being lifted from my eyes,” Jobs later said, “I could see what the future of computing was destined to be.”

Gumption has the knack for finding ways to get things done. Gumption is resourceful. Resourcefulness is characterized by vision, i.e. the ability to see the means at hand, creativity, and WhoHowness (a word I invented to name the indispensable skill of knowing who and how to ask for help).

Apple was also working on an easy-to- use small computer. At PARC, Jobs saw that Xerox had solved many of the problems Apple’s engineers were struggling with. Just seeing that the problems could be solved was the means at hand for Apple to solve them too. 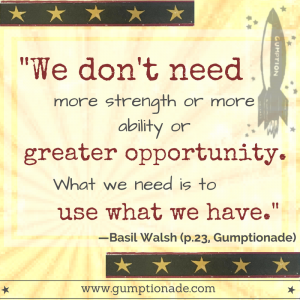 Apple introduced the Mac in 1984, priced for the mass consumer audience. Xerox never made a commercially successful computer. Jobs saw what Xerox could not because:

“They were copier-heads who had no clue what a computer could do,” he told his biographer. Xerox lacked the experience Jobs got from selling the Apple I and II to consumers.

What big opportunity is right in front of your eyes? Gumptionade – The Booster for Your Self Improvement Plan can help you see it.